Inside Randy Poffo, A ‘Macho Man’ Was Waiting To Get Out

I n the early 1970s, Randy Poffo was just another low minor-leaguer who found himself lost in the St. Louis Cardinals organization. ”He was a real nice guy,” former Cardinals player development director Lee Thomas recalled. ”He seemed like such a quiet guy at the time.”

Paul Fauks, the longtime farm system administrator, found him somewhat boring. ”He didn’t have much to say to anybody,” he said. ”He was just one of those kids trying to make it in baseball with very little chance.”

Poffo played with four Class A farm teams in three organizations before finally striking out into professional wrestling.

”We knew he was moving on to something else, we didn’t know what,”

END_OF_DOCUMENT_TOKEN_TO_BE_REPLACED

MAY 11, 1987. Less than a month after his brother Mike killed himself because he felt he couldn’t live up to the family name, Kevin Von Erich was working the main event in Fort Worth when something rare happened: a moment of spontaneous, unmediated terror. As the television cameras rolled, teenage girls squealed, and spectators shouted for blood, Kevin and his opponent crisscrossed off the ropes. No doubt they were setting up the usual wild finish – perhaps a variation on the patented Von Erich Iron Claw, or a violent collision followed by an out-of-control brawl outside the ring, or maybe a miscarriage of justice with the ref taking an accidental bump and failing to see the heel clobber the baby face with a foreign object. END_OF_DOCUMENT_TOKEN_TO_BE_REPLACED

The Ultimate Warrior of Wrestling 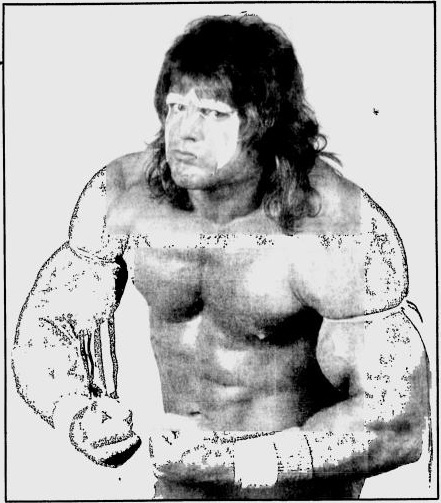 The Ultimate Warrior is one of the wrestlers who appeared recently at the Lakeland Civic Center.

The big voice boomed over the phone line.  It was hoarse, breathy, athletic.  And it was apologetic.

Nobody could have made up this touching reason for being two hours late for an interview.  Certainly not someone with a reputation for crushing opponents with the well-defined biceps of a Mr. Universe. END_OF_DOCUMENT_TOKEN_TO_BE_REPLACED

When President Harry S Truman stopped off at Scott Air Force Base while heading home to Independence, Mo., after World War II,military brass lined the landing strip, eager to meet and to shake hands with the man whose use of the atomic bomb had ended the bloodbath.

Truman stood at the door of the presidential plane, waving his hat in a friendly salute. To begin his greetings, he spied a dumpy, smiling sergeant standing at attention among the non-coms and said, “Hi, Sam.”

Sam Muchnick, now 83, remains one of the friendliest faces on both sides of the river. The sportswriter-promoter-good will man-good guy symbolizes the nice things that can happen to a temperate man who always has seemed to rise above life’s rat race.

It’s a big year for Muchnick, if not for his beloved Cardinals, the club he covered in the pennant-winning seasons of 1930 and ‘31. He was a wrestling promoter for nearly 40 years and president of the National Wrestling Alliance for 25.

As a result, directors of the Missouri Athletic Club voted to extend to him a special meritorious-service award at the club’s annual sports dinner, moved up to Nov. 2 from January.

The dinner will be a private party, highlighted by the announcement of a man or woman sports personality of the year.awerlabw Muchnick’s appeal crosses economic and ecumenical borders. A Soviet-born Jew, Sam is closer to Catholic priests than to rabbis.

Sam still pines for the love of his life, Helen, 15 years younger, who died seven-plus years ago. Her death occurred 11 months before he sold his wrestling promotion.

Although he hangs his hat in a fashionable Brentwood condominium, he skirts loneliness by spending more time on the street than a Fuller Brush salesman. He’s a generous host and a good guest.

The kiss-and-makeup style engendered by Muchnick, a Central High graduate, was never more evident than when he headed the National Wrestling Alliance for a quarter-century. The alliance covered 40 states, four countries (Canada, Mexico, Japan and Australia) and had European agreements.

Now? The alliance is gone, and wrestling, always a circus, has degenerated into a chamber of horrors. Said the revolted Muchnick, “I think Lou Thesz could beat Hulk Hogan right now, and Lou’s 72.”

If there’s one thing I like about Muchnick,s it’s his ranking journalism as second only to medicine among the professions. “Without the newspaper,” he has said more than once, “crooked politicians could run amok at all levels, local and national.”

Muchnick got into the newspaper game unusually. A $1,900-a-year postal clerk, he entered a nationally syndicated contest to pick the All-Star teams that had considerable appeal from the ‘20s and into the ‘30s. For finishing third in 1925 — “I still think Frank Frisch should have been at third base rather than Ozzie Bluege”—he received $25 from the Post-Dispatch and an invitation to write what he thought the Cardinals and Browns needed for ‘26.

For the Redbirds, Sam listed a right fielder and a pitcher as a top need. They got both, Billy Southworth and Grover Cleveland Alexander, and their first pennant. By then, at the recommendation of Post-Dispatch sports editor John Edward Wray, Muchnick had sought and gained a sportswriting job at the old St. Louis Times.

“At a pay cut to 20 bucks a week,” he recalled, grinning. When the Times went under in the Depression summer of 1932, Muchnick rejected a chance to go to New York and, also, turned down a job from old boss Sid Keener, then at the merged Star-Times. There, he would have had to take a friend’s job.

So as a combination boxing-wrestling columnist, he wound up in public relations for promoter Tom Packs. Ultimately, he promoted successfully on his own, including the most recent boxing championship bout in St. Louis, welterweight Don Jordan over St. Louis’ Virgil Akins in 1959.

But here I am running out of space without having told how Sam met Al Capone; how he beat Frank Lane in handball for a suit of clothes; how friend Ray Steele beat King Levinsky in a 35-second mixed wrestling-boxing match; and how Sam chickened out on a chance to play left field for the Cardinals in an exhibition game in ‘29 so he could drink Prohibition beer with a couple of pitchers; and how he loved to pull pranks on comic Lou Costello and others.

But maybe I’d be stepping on Muchnick’s lines when he accepts the meritorious award from the MAC.